"D ental Tourism” the brochure called it. “Save thousands of dollars,” it touted, tempting U.S. citizens to cross the southern border for affordable healthcare. My husband and I had been on the road for five years. The lingering fumes of adolescent optimism and solar panels propelled our travels in a vintage motorhome. Our first-world survival instincts were honed. We considered ourselves master scavengers, having streamlined the process of acquiring the necessities for life that most take for granted in North America.

It's shocking how much time is involved to find potable water when it doesn’t flow freely from brushed chrome spigots strategically located throughout a 3 bed/2 bath living space.

Next stop: the Florida Keys. With a 25-year-old engine, the last thing we expected to break our stride was candy addiction. His sweet tooth cracked, the next within days, another on the brink. Subtle but persistent pain followed, like a slow-rolling storm with spider-lightning on the horizon. Post-x-rays, local estimates put repair work nearing ten thousand dollars. “But I floss!” he bemoaned after every call for an estimate.

Muddled news reports droned on in the background. Death tolls were rising in China from a virus called something that brought to mind a popular brand of beer. Many thought it’ll fizzle out by the time it gets here, like SARS. Still, “let’s review the flashcards,” pundits urged: Ebola; AIDS; The Black Plague. “Woah, now! Don’t go extremist on us,” politicians roared. Their monster truck-sized spring mud fling was just getting started. We booked our “dental tourism” adventure to “save thousands.”

As the trip grew closer, confirmed Coronavirus cases on the West Coast increased, followed by reports of deaths from “unknown causes” all over the country. News stations scrambled to give viewers updates that wouldn’t ruffle bald eagle feathers, while our neighbor, a retired Marine, reportedly repaired his teeth with epoxy. We were Mexico bound.

The “shuttle service”—a guy in his mini-van—picked us up on the U.S. side of the border before noon.

We thought about wearing masks, but the store shelves were empty. I had planned to sew some when we returned—how effective would they be at a dentist’s office, anyway? The beer virus couldn’t have come this far south yet. The driver wore a mask and sprayed disinfectant, like air freshener, at every stop. “I have an immunocompromised wife and two kids,” he said. I nodded and wrapped a scarf around my face, hubs a bandana. The third passenger, a fellow nomad and “dental tourist” who’d just come from a music festival in California, followed suit. We drove across the border. No stops. The sun beat down on the small colorful dilapidated structures lining the cracked and pitted roads. Small fans animated faded streamers in multiple windows of each home. We waited outside a busy tamale stand while our driver dropped off “prescriptions” wrapped in brown parchment packed like frozen meat from a deli “for a friend.”

The facility advertised in the “Dental Tourism” brochure was as clean and nice as any I’d ever visited in the United States. Oversized couches in the reception area offered respite between procedures. Popular magazine selections in English and Spanish were spread across the side tables. Top 40 hits played from overhead. While a polite hygienist wearing turquoise scrubs suctioned excess water from my mouth through a small tube, the steady-handed dentist told me she’d been educated in the states and lived in Texas but drove across the border every day to run her practice after dropping her kids off at school. By the end of the conversation, my two fillings were completed. She also fixed another I’d had filled by a dentist in Florida, (who had fused two teeth). Then she moved on to my husband’s mouth.

There were hushed discussions concerning the extent of the work needed. “Normally, we’d break this up over a few visits, but there’s talk of closing the border—are you up for this?” she asked. He nodded. One filling, two root canals, and three pending crowns later, we watched the sun set while a young man in the back-room color-matched porcelain to my husband’s smile. The receptionist and hygienist played games on their phones behind the front desk. No masks. I’d long since given up on breathing through my thin scarf.

Our disinfected chauffeur came back around 9:00 p.m. and waited patiently for the man wielding a Dremel and dental cement to complete his art installation. After a brief stop at a 24-hour pharmacy for antibiotics and pain medication, the driver advised us to have our passports ready. Moments later, a pickup truck marked POLICIA zipped in front of us. Half a dozen men dressed in all black and Kevlar sat high on the sides of the truck bed in rows facing each other. Automatic weapons strapped to their backs. Fortunately, they were less interested in us than the man with a face painted like a clown, juggling oranges in the middle of the road.

Shots fired out from somewhere nearby as we approached the border. Drug-sniffing dogs paced rows of cars, and a young male American in full fatigues scrutinized our passports. “You shouldn’t be here,” he said with haunting depth and sincerity. I pictured our dogs back at the RV being looked after by a neighbor and hoped we wouldn’t be detained. The driver showed him some sort of credentials and spoke quickly, mentioning the dental clinic. Then we all swore we weren’t transporting any medications. My husband was green. I wrapped my scarf around my face and paced my blink. “He okay?” the soldier asked, nodding to my husband in the backseat. “Two root canals and three crowns,” my husband shot back. The officer waved us through. “Don’t come back,” he added as the van lurched forward. The driver nodded.

I imagine that border crossing going differently if all the passengers hadn’t been caucasian.

A few days later, three Coronavirus deaths were reported in the “dental tourism” town. A week later, I walked outside with one of my dogs, then struggled to climb the stairs back into the RV. My breath was labored, my heart raced, and my legs resisted the upward motion. But as the days dragged on and breathing got harder, the most surprising difficulty was the psychosis. The literal voice in my head telling me to give up. Not many have talked about it, but before confirmation of COVID-induced psychosis came from psychologists around the country, I saw it in the reported suicides of doctors who’d recovered. “Why would someone kill themselves after recovering?” the talking heads in the “news” boxes punted to pretty faces without psychology degrees. But it wasn’t just the daily death toll in their line of work breaking them. It was that voice. We didn’t give essential and frontline workers the time needed to regain enough strength to fight the voice that lingered after other symptoms subsided. Like a Siren luring sailors to crash and die on her rocky shores, COVID cried out from the darkness for those who had escaped her death grip.

As the world rebutted stasis while the virus wailed on, I recovered. My husband’s mouth healed at the same pace he beat COVID—much faster than I did. The new structures in his mouth became permanent residents while eviction moratoriums across the U.S. lapsed. And while others groaned about mask mandates or not being able to frequent their favorite bar, the survivors did what people have done since humans stood upright. They began reinventing themselves and carving new trails—literal and figurative. Some left the cities, seeking green pastures in small towns. Space to plant a garden. Caravans hit the open road in our rearview. Some took early retirement to do so, but many are middle-aged (and younger) with kids in tow. And slowly, without mention on the nightly news, humanity started rebooting. A mass exodus of survivors began reinventing the American dream. Escaping the sirens lamenting onshore, they set out to sea, collecting energy from the sun and growing food along the way whilst learning how to streamline the process of acquiring the necessities for life that most take for granted in North America. And whenever the need arises, I tell them how to buy teeth in Mexico. 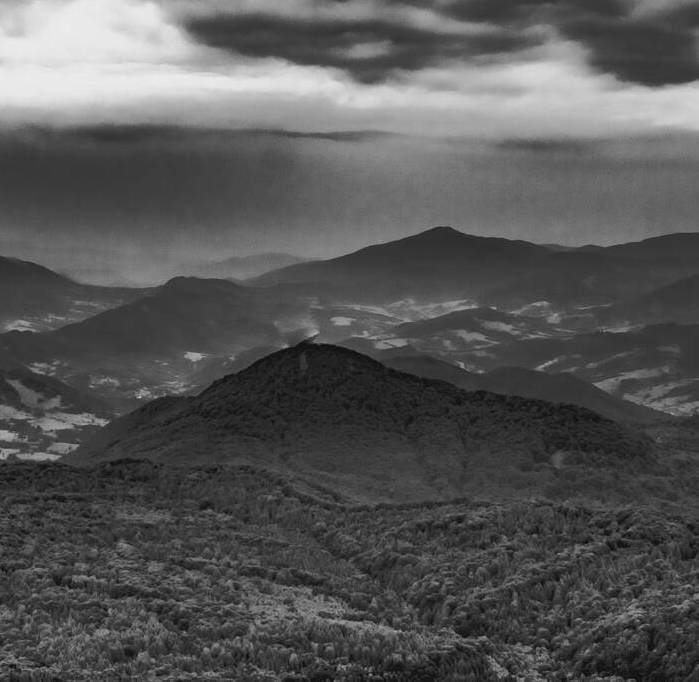 Our hot air balloon / turned into a lead ball. ⁠—Marjana Savka, Ukrainian poet They look like a virus you’d see under a microscope. A city flattened by artillery. A

the desert does not love you back, but it sees you, dunes hunched in watchful wake, brooding and clenching a hold of my heart and eating it. there are stains on the sky from my fingers sticky with the juice of dates and aloe,