A t first, language was only the spoken word: the emittance of noise and its reception, mouths giving tone and annunciation to breath. After thousands of years came writing—a new medium with visual and tactile elements. Language became something tangible and finite. Much later, in the 1400s, the Gutenberg printing press expanded the uses of that medium, giving words more shoes to fill: entertainment and mass communication, for example, rather than just bookkeeping. Finally, in the late twentieth century, a computer scientist named Tim Bernes Lee invented the World Wide Web. Words entered a new, digital medium; once again, the economics and the experience of language changed.

Today, the digital user interface (UI) of language online mimics the design tropes we are familiar with from the analog. We squish black letters into small borders on white screens despite the absence of physical constraints on their layout, and despite the fundamental changes to scale and space that computer bytes, uninhibited by gravity, enable. This literalism results in a digital medium that is both inferior and problematic, unable to cope with its own challenges. Our digital content UI has, as of yet, neither replicated nor replaced the tactile romance of its physical counterpart—it remains more enjoyable, for most, to read or write from paper. Our digital content UI also has not grappled with the transformation it has enabled in content production economics. A digital work (a blog post, a tweet) has zero marginal transaction costs; once created, it is nearly free to reproduce. This is why there are no gatekeepers on platforms like Twitter: no one needs to finance the distribution of a tweet in the same way that publishers have historically needed to front book costs. The elimination of these middlemen (publishers, printing houses, newspapers, bookstores, etc.) has led to a vacuum of authority, legitimacy, and curation in our digital content. The replacement for both of these deficits is an improved UI for content; we just need to develop the imagination to create it.

All mediums take time to grow into themselves: we gradually invent and modify their characteristics to better communicate through them, sometimes in surprising ways. We  translate the pause and rhythm of speech into the written word not via space on a page—the literal correlative—but with an entirely new tactic, something native to the written medium: punctuation. Digital text will develop similarly endemic features over time, and just as modern alphabets look markedly different from those phonetic symbols first used by the Phoenicians thousands of years ago, it will be transformed. Our user interface for content will grow to take advantage of capacities for layering, replicability, and modularity to embed properties and processes of communication into the digital medium that, until now, we have been unable to contain within form.

First, digital content does not exist, or have to exist, in just one flat plane. Digital layering can bring to life the ecosystem of creation and engagement that exists around a work: what informed it and what it proceeded to inform. Take the case of the hyperlink: here you have a word that holds something under it. A hyperlink is a portal to another webpage, serving rhetorically as source, context, or trailhead for additional exploration. This is a device―and a layer―we invented. It is wholly unique to digital texts.

If we were to follow the directions contained by all hyperlinks in all digital works, we would have a map of what the French philosopher Michel Foucault called “the great accumulation of the already”: the context of, and connections between, any and all works ever produced. Search engines already function by taking advantage of this network (via PageRank algorithms), and some consumer-grade softwares, such as Roam Research, are building visualization capabilities for linked personal documents. What we are lacking, however, is a tool that provides an all-encompassing view of the subtext of any document, the network surrounding any given piece of content.

If hyperlinks allow us to see beneath and across texts, other tools permit us to see below them. In first generation internet content, elements pertaining to an article are all presented “flatly,” or in line with the text. This spatial relationship isn’t necessarily truthful to the underlying semantic relationships. Comment and share buttons, for example, are effectively “meta” to, or above, the text. They are composed after the text is composed; they are commentaries on top of it. Companies like Genius Lyrics and Hypothes.is are building the UI for this layer of interaction to exist on top of text by allowing users to annotate publicly on documents. In conjunction with the layer of context below a text, these tools represent the foundation for a layer of interaction on top of text.

Second, replicability allows each digital layer to be truly interactive and live. Because digital texts have zero marginal transaction costs, they can be copied an infinite number of times at no cost. This can be for the purposes of appending a work, interacting with it, or distributing its ownership. In the early days of the internet, the open source software movement took advantage of this to permit distributed ownership and infinite versioning, a kind of digital commons. This can also exist in digital texts. Content and the layers surrounding it can be produced and accessed and interacted with simultaneously, permitting a live dialogue above the text. Song explanations on Genius Lyrics, for example, are not stagnant annotations, like a comment in a book would be. The ownership of the layer is truly communal and up-to-date.

Third, modularity of text will formalize the process by which works build off other works. As computer science researcher and cultural theorist Nadia Eghbal writes, “[n]early all software today relies on free, public code, written and maintained by communities of developers and other talent.” Developers do not start from scratch every time they go to write a program; they work atop digital packages and entire open source operating systems.

In reality, this is also how an essay or article or poem is written—one work is an agglomeration of other works—and the internet has the potential to formalize this process of borrowing and building around. Almanac, a startup based in San Francisco, provides an example of how this could look baked into form. They are building a system wherein business workers can utilize documentation written by other practitioners as a jumping-off point for their own work via content versioning. Users can fork, or borrow, a copy of a public document to add their own work or modify the underlying content. In traditional code versioning, these changes can also be merged back to the original text, pending review.

Documents can, in this way, become communal and adaptive. Modular components of a text can then be signaled via spatial embedding or visual highlighting (i.e., this block originated here; this block is quoted here.) This has practical, exploratory, and legitimizing benefits: there is no such thing as an echo chamber when you cannot escape the roots and branches and tangle of discourse in which any argument exists.

We know there are problems with our current means of interacting with content because we can feel them. At present, if we feel completely free in our digital texts it is, as the philosopher Slavoj Žižek says, “because we lack the very language to articulate our unfreedom.” Previous mediums for language lacked the ability to contain processes of editing, creating, and interacting with an argument or text due to limitations of their structure: a paper only has two sides; you cannot touch the spoken word. But content does exist in a network of all content; content does link to and from other pieces of content; content is annotated upon and shared; content is replicated. In the digital world, we can acknowledge and accommodate these realities—if only we can create the interface to do so. 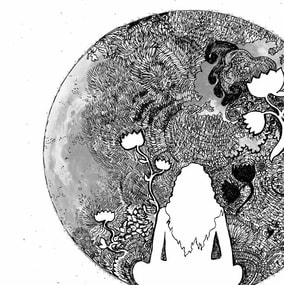 The spring the coronavirus hit I would sit. Next to my window with a cup of green teaTrying to be mindful, self-consciously watching the firstLeaves on the six saplings outside of my windowExpanding and multiplying by the dayAs the morning sun leapt over the horizon,Lighting up the field like a

As the plane touches down, the tires give off a screeching sound, the force of the braking sends loose items rolling, and the pilot welcomes the crowd to its destination. Most passengers feel a sense of excitement, relief, and maybe some lingering nausea. I always feel a bit of melancholy that the