Translated by Nina Murray. Nina is a poet and literary translator currently on sabbatical from her job as a Foreign Service Officer. She lives in the UK.

This piece is a reflection on the Maidan protest that started at the end of the 2013 in Kyiv and has gone down in history known as the Revolution of Dignity. The author was located in Slovenia where she was writing her dissertation when the Maidan protests started. The piece was written in 2020.

I found a discussion board online (no other ones) and put up a post saying I was going to protest at the Russian Embassy the following day and would love for others to join me. Several hours later, my post was deleted. I found the list of registered users which included each person's country of origin. I pulled out everyone who listed Ukraine and started sending them personal messages. A few people wrote back, saying it was a great idea, but they were not in Slovenia at the moment, but in Odesa, Kyiv, or Austria, and would be with me in spirit. One guy, a student in Ljubljana, first said he would come, then started asking whether I had the permit and other irrelevant things. Finally he said he didn't think it was worth doing anything without a permit. A coward, I thought—we won't change Ukraine with people like him, that's for sure.

The following day, Ivo and I made our way to Ljubljana and found the embassy row. Our country's neighbor's embassy was right next to the American one. Excellent, we thought.

Maidan found me in Slovenia. At a certain point, I simply no longer had the energy to focus on finishing my dissertation. Physically, my body ached with the oppressing pain of being separated  from the collective idea of freedom that was being so clearly articulated back there, in Kyiv. The authorities had the student protesters dispersed. The next day, the people came back—thousands of times more of them.

I was in the middle of writing. I had deadlines: I was to turn in my first three chapters in three months, and the chapters simply did not exist. They were just stuff, unprocessed material, layers of things that collapsed over my head, buried me. I had intentionally chosen a peace-time subject: representations of Yugoslavia in the museums of former Yugoslavian countries. A set-up to analyze a relatively peaceful, “bright” period of life in Yugoslavia before the wars as the subject represented in museums today, i.e. long after the actual wars. The idea was to avoid the Balkan wars of the 1990s altogether, although understanding the 'before' and the 'after' without dealing with what happened 'in-between' appeared hardly possible.

Kosovo, Srebrenitsa, the two-year Siege of Sarajevo. Death, many deaths, the hatred, the populism, Limonov and Karadzic firing their AK-47s, “the Slavic Orthodox unity,” my God, such horrors, and they all happened in my lifetime. This was happening while I went to school, or skipped classes, or bought a puff pastry in the underground mall at Metro Sovetskaya. I took walks with my friends, felt sad, fell in love, ate sour-cream-and-leek-flavored potato chips (one remembers one's tastes), or helped my parents freeze strawberries and apricots for the winter, separated berries from their green stems, pitted the fruit.

“You know,” I say to Ivo, “the more I learn about these wars, the more I am amazed and awed by the fact that Ukraine was able to secure its independence as peacefully as it did. Yes, we ended up poor, yes, we totally failed the opportunity to become a decent European country when our economic indicators were better than Poland's—but we did not shed blood! It's incredible how the entire rusty monolith disintegrated into shards so easily. We had no local Milosevic keen to pick at the dead carcass, ready to erect a new discourse of hatred, or ethnic and religious intolerance. The fucking revanchist jackal!”

Things on the Maidan heat up. The Berkut police beat the protesters.

“I can't be like this any more! I have to do something. I can't be sitting here in my office, reading and writing about a different war when this is happening back home. Let's do something! Let's fly back to Kyiv! No, we can't, you can't just quit your job, and I teach on Wednesdays... Let's go to Ljubljana then, start a rally.”

“Who's going to come to that rally? And don't you need a permit from the police? You have to apply days in advance.”

We pulled out the signs we had made. This was our first protesting experience, and we had no idea whether there was anything like a commonly accepted protocol—we just did whatever felt right. I positioned myself next to the plaque that read “Embassy of the Russian Federation,” and Ivo faced me from a hill across the street. My sign, written in pen, read, “Putin, save the penguins of the Arctic.” Ivo's was blank, as in, no explanation necessary.

We hear approaching sirens, and two police cars turn sharply down the street and come to a stop next to us. One officer starts toward me, two more go for Ivo. Let them arrest me, I think, to hell with the dissertation. I hate the cynicism, the fat lazy Europe, what did its bureaucrats ever do when people in Bosnia were being killed? If they deport me back to Ukraine, at least I'll have a chance to join the Maidan.

“Dober dan, what are you doing here?”

“What are the reasons for your protest?”

“Ukraine, Russia, Putin, the Maidan, violence against peaceful protesters there...” I do my best to speak deliberately, dispassionately, like the scholar I am, but in this very moment more images pop up, as if out of an uncorked bottle, and the pain comes, the urgent need to be free. There's a lump in my throat as I say, “Russia, we are too cynical...” Tears come, damn it, damn it, stop right now, get a hold of yourself!

“People in Kyiv want to be heard, as is their civic right, when they disagree with the President's policy, and Russia is trying to use this in its own interests. Right?” The officer asks.

More tears run down my face at finding this unexpected understanding, both of what's happening and of my own self with my pitiful piece of paper.

“What does your sign say? I have to put it down in my report. Putin, please save... whom?”

“The penguins of the Arctic.”

“But penguins live in the Antarctic, don't they?”

“Got it, I have it down. I need to see your ID. What are you doing in Slovenia?”

He'll fine me, I think, but fine, go ahead, I'll just eat less for a month or so. It'll do me good. The officer writes down my information, but gives no sign of intending to detain me or to issue a fine. This feels very strange. Being treated with such empathy makes everything inside me squeeze even tighter.

The officer asks how long we plan to stay here.

“Two-three hours, until we freeze?”“Okay. You have no plans to cause public disturbance or vandalize the embassy, right? Fine then, take care. Dobre, nasvidenje.”

Translations from Ukrainian by Ali Kinsella and Dzvinia Orlowsky. Bios below. don’t be afraid it’s just a breath just a moment just a train speeding up into the mountains it’s a train a lonely game a short dream a railcar stopped 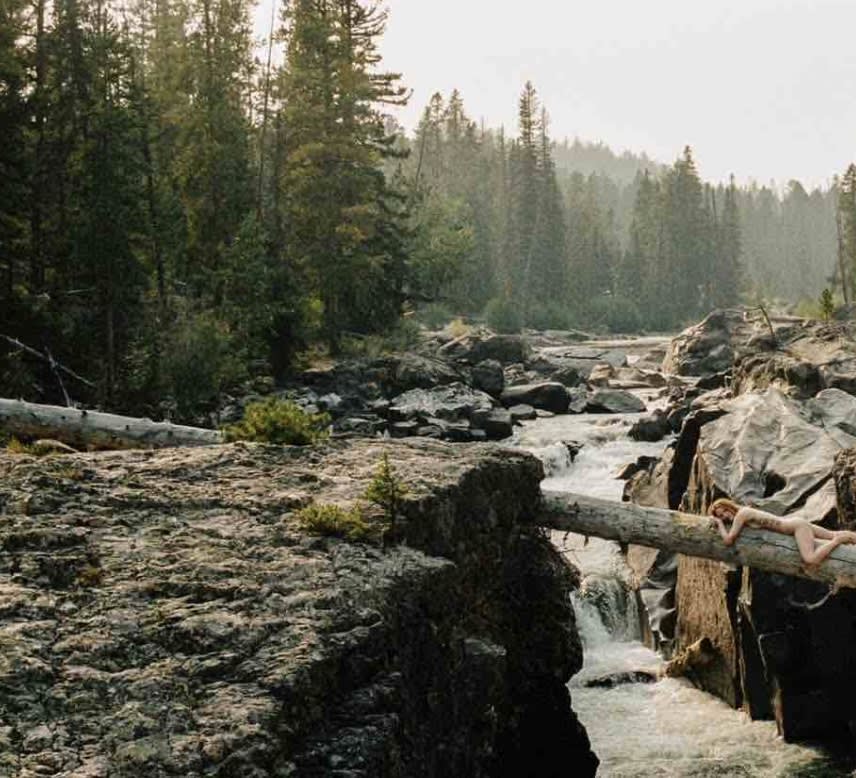 Artist’s Note When I think of the theme “Trace,” I find my mind wanders out to the periphery of things. We can think of the obvious trace we leave